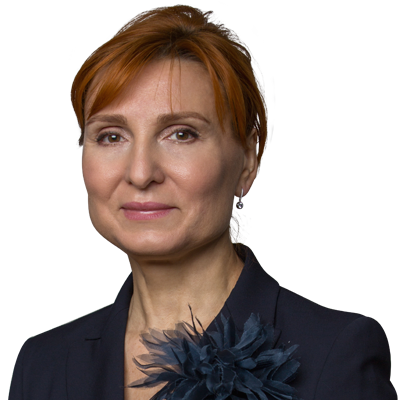 Oksana is a certified Business Mediator and Psychologist. She began working with IPR GROUP in 2007 as a business mediator. In this role she conducted negotiations on out-of-court settlement of disputes in the field of intellectual property.

In 2018 she moved on to the position of Chief Operating Officer of IPR GROUP in which she currently ensures the establishment of business contacts, holds professional meetings and representative events, and oversees the overall development of the company.

She has extensive experience in the publishing and media business, and has managed several roles in the past, which include: Founder and publisher of Academy Magazine; Head for Advertising of Karavan-Media publishing house; and CEO of 7 plus 7 media, Ukrainian-German Publishing House.

She has implemented and supervised a number of international cultural and educational projects since 2010.

As an expert in industrial design, she implemented a number of projects in the field of architecture and design from 2013 till date, which have received awards at professional competitions.